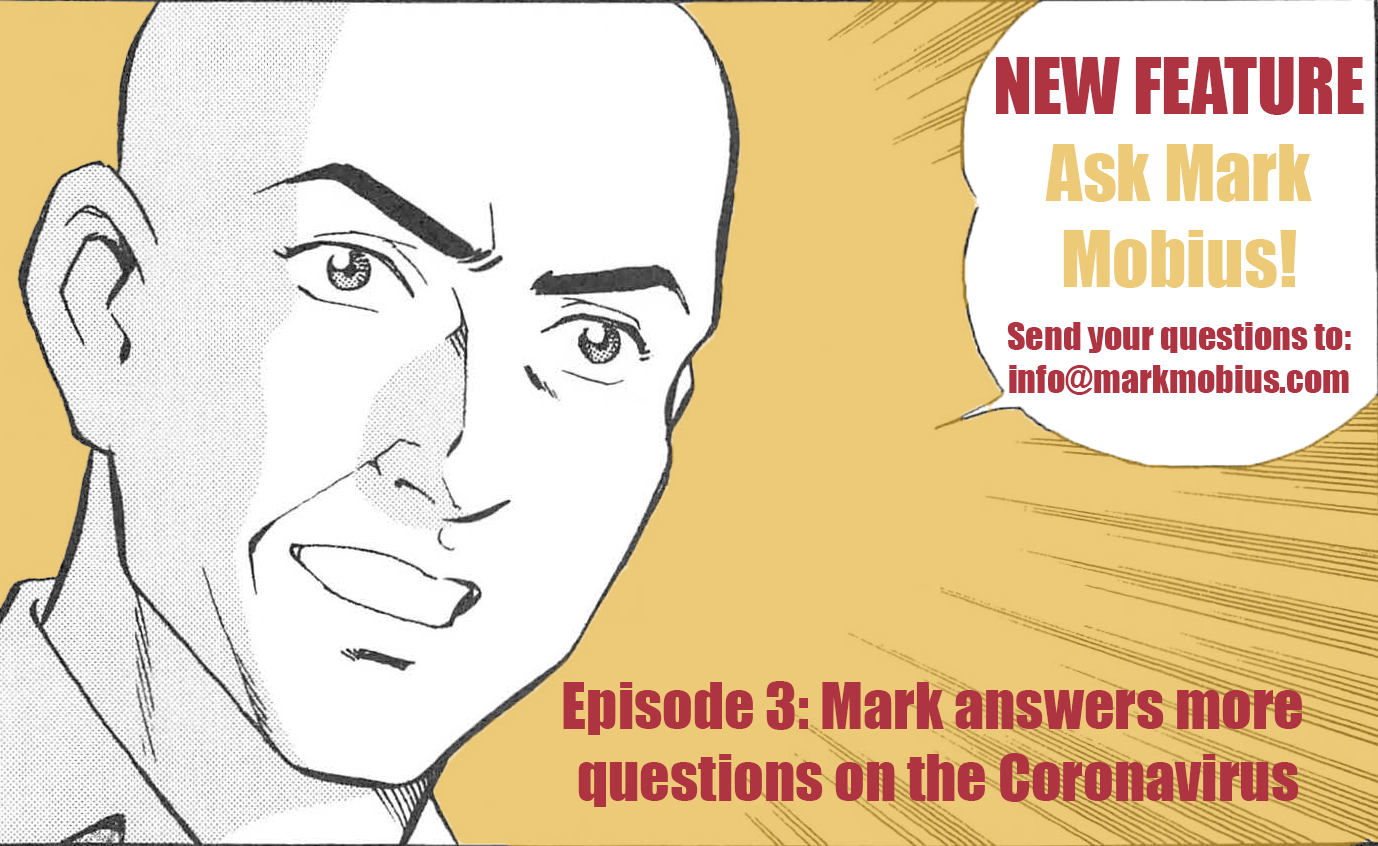 Ask Mark Mobius! is a new feature on markmobius.com, where we curate questions asked by readers and investors for Mark to answer. These will be published on a regular basis. If you like to ask Mark a question please send an email to info@markmobius.com. While Mark might not be able to answer every single query we will try our best to get as many questions answered as possible.

Could you give me your view on the ruble bonds?

MM: We have seen a large outflow from Russian government bonds in the last month due to the coronavirus outbreak and the oil price crisis. However, the oil price war ended with the recent OPEC+ deal, and with Russia’s Central Bank Governor Elvira Nabiullina signalling further rate cuts, the Ruble bonds could appreciate. But if you are a USD investor you must consider the exchange rate of the Ruble against the USD which has seen significant volatility.

This period of coronavirus is stressing for economies around the world. How long will it take to recover from the crisis in countries such as France and Germany? What is your global analysis, which countries will be better positioned to deal with the crisis which worse?

MM: If we look only at financial markets our research indicates that the average bear market lasts about 15 months. But that’s the AVERAGE. The range is wide and the bear market can continue for more years but that would be unusual in my view.

These days, with communications being what they are, movements are much more volatile and I would not expect an extended downturn. In terms of the economic environment, yes, we will see a recession and it will take several years for a full recovery but if you look at specific industries and companies, many will recover more quickly. Even in the current environment some companies, for example those suppling equipment to treat the virus patients, are doing very well. In every country there are good companies that are performing well despite the macro environment being what it is.

After the unexpected volatility and the recent rally do you expect gold to continue to rise?

MM: I think gold should constitute at least 10% of everyone's portfolios. In these times of expanding money supply and low interest rates gold's value as a currency is likely to rise.

Do you think the current South African administration will be able turn the country's economic fortunes around (and perhaps evade a Moody's downgrade)?

MM: Unfortunately it is too late for that. Moody has already downgraded the country into junk bond status.

Right now the prognosis is not good since President Ramaphosa’s promised “new dawn” has not come. He did not tackle the extreme inequality nor the high unemployment. Nor has he managed to make drastic changes to the structure of debt-piling, corrupt state enterprises or taken important steps to ensure energy stability by freeing up the market for electricity.

Members of the ANC and their supporting unions have substantial personal interests in continuing the status quo in state enterprises like Eskom and South African Airlines. Reform seems to be almost impossible with the result that the country continues to suffer from power cuts (although now with the shutdown that has been ameliorated somewhat) and these companies continue to bleed money because of overstaffing and inefficiencies.

The shutdown will make matters worse, of course, since the 30% unemployment rate will move much higher and there are no measures in place to restart the economy.

Russia seems to have one of the best fiscal and monetary positions around the world, despite low GDP growth. Are you bullish on Russia, considering the current oil price war with Saudi Arabia and what appears to be indefinite sanctions placed on the country? ‍

MM: Yes, I am positive on Russia because of their conservative economic stance and their high gold holdings. As you point out the problem is their low GDP growth rate but with the right policies and better relations with the U.S. and Europe that situation could change. Furthermore, with the OPEC+ deal agreed it seems the oil price war between Russia and Saudi Arabia has now ended which likely will provide a boost for the Russian economy.

MM: Sorry, unfortunately we can’t comment on individual companies. Staffing business firms could do well in this environment if they are not only engaged in recruitment but also in termination services. Due to the crisis many workers are being terminated and firms will need guidance on how to terminate staff in a legal and proper way trough generous and fair termination payments or outplacement and training programs to minimize worker hardship. Furthermore, while regular recruiting activities might face challenges in these times, there has been a surge in demand for temporary or contract staff in certain sectors such as agriculture, logistics or retail (supermarkets). Staffing businesses who provide these services could profit.‍

What will your asset allocation be in times of COVID-19? ‍

MM: In line with where we find the best bargains. In this environment there are bargains everywhere. Our asset allocation will depend on finding undervalued companies with a sound business model that are financially healthy and can emerge from this crisis intact and with the resources to increase market shares.‍

In view of a renewed strength in the U.S. dollar, the subsequent selloff in emerging currencies as well as rising bond yields across EM's, how at risk are emerging markets corporations of defaulting on USD denominated debt? Any countries that we should be particularly worried about? ‍

If China had stopped Chinese citizens from travelling abroad for Chinese New Year -the world would have more time to deal with the spread of Covid19?‍

MM: Possibly. I don’t think the spread of the virus would have been stopped but maybe delayed. On the other hand it is hard to know at what point the Chinese realised the enormous threat the virus posed. Don’t forget this was a completely new virus. I think when they did they reacted very decisively and it seems with success. Their reaction has become sort of a role model for other countries who imposed lock downs. Since then, the Chinese have been co-operating with countries around the world to share their knowledge and provide help in containing the virus. They have also been sending equipment such as face masks and testing kits to other hot spots in the world.