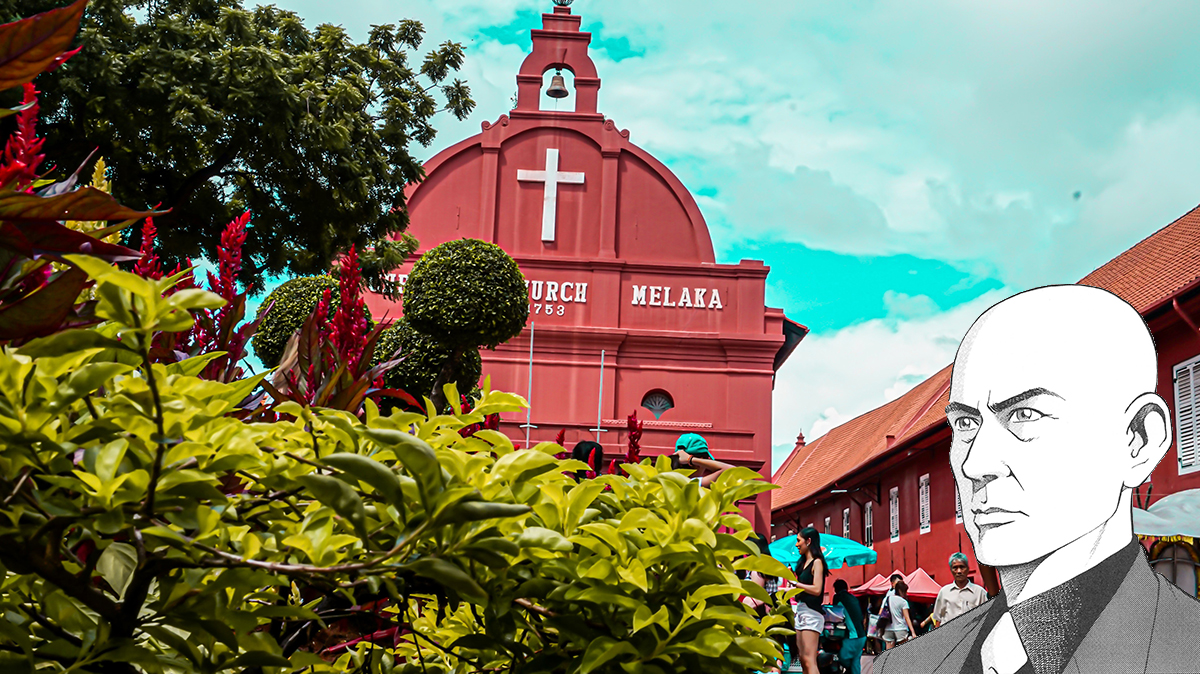 A Visit To Malacca (Malaysia)

Juli 2018. Last week I blogged about my fascinating trip to Istanbul during the Turkish Presidential election.

The people of Malaysia also recently went to the polls and produced an electoral earthquake. For the first time since the country won its independence from Britain in 1957, the ruling coalition Barisan Nasional (BN) was defeated.

At the age of 92, Tun Dr. Mahathir Mohamad returned to office as head of a new party and as the world oldest Prime Minister (he had previously served from 1981 to 2003). Following his swearing in, Mahathir called for an inquiry into the massive trillion dollar corruption scandal which engulfed the previous government and led to the arrest of former Prime Minister Najib Razak on corruption charges.

After returning from Istanbul, I decided to get an insight into the local mood by visiting the city of Malacca about 90 miles south east of Malaysia’s capital Kuala Lumpur.

Normally when I travel to Malaysia from Singapore I would either drive to Johor or fly to Kuala Lumpur. This time I decided to take the bus to Malacca which I was told would take about three hours. It actually turned out to be much longer due to the heavy traffic and immigration procedures on both sides of the border.

I found my visit to Malacca revealing, in light of the tremendous changes compared to my first trip to the city 30 years ago. At that time you could not even call it a city. Rather it was a small, sleepy town that seemed untouched by the wider world. Although the old town is still in existence and as quaint as ever, there has been an incredible expansion of the city limits as a result of land reclamation. There have even been a number of high-rises sprouting up. This pattern is similar to what I have witnessed in other Asian cities. There is a growing trend for the construction of mixed-use developments with apartment buildings, hotels, and shopping centres in one big complex. I stayed at the Doubletree Hilton, which was part of such a complex built on reclaimed land overlooking the Straits of Malacca. It is a beautiful hotel and I was surprised to find that the room rate was only the equivalent of US$90 including breakfast.

Talking to people about the election I sensed some concerns around vote-rigging by the powerful ruling coalition. As a result many citizens kept an eye on the polling stations and used Facebook and Twitter to inform others of any possible tampering. Whenever news spread about potential wrong doing, crowds of people gathered around the polling stations to ensure no corruption was taking place. In some cases, the crowd stopped policemen from bringing in boxes of false ballots. Malacca’s district had been supportive of the opposition for quite some time so it was not surprising that the ruling party was defeated here.

Besides being tempted by the very low prices in Malacca’s shops, which were half the price of Singapore, I decided to visit some of the tourist attractions. First I took a river cruise on the Malacca River through the old town. The city government has beautifully restored the river, which was once heavily polluted. They have lined the banks with walkways, elaborately decorated bridges and painted murals on the walls of houses. Close to my disembarking point lay the Malacca Maritime Museum, a full-size reproduction of the Portuguese ship Flor de la Mar (Flower of the Sea), which under the leadership of Afonso de Albuquerque supported the conquest of Malacca by the Portuguese in 1511.

At the time of the Portuguese conquest, Malacca was a very rich city due to the spice trade traversing the straits between the Malaysian Peninsula and Indonesia. It was thus a key centre for commerce between Malay, Gujarati, Chinese, Japanese, Javanese, Bengali, Persian, Arabic traders. To this day the city maintains influences from those different cultures. Malacca was ruled by a Malay Sultanate until 1511 when the Portuguese took control, followed by the Dutch in 1753, and the British in 1824. In 1942 it came under Japanese occupation. Finally it became part of the independent Federation of Malaya in 1948. As a result of its history, the city centre was listed as a UNESCO World Heritage Site in 2008.

Walking around the town I came across a major property developer’s exhibition. The Singaporean firm had been heavily investing in apartments, hotels and shopping centres in Malacca. They have built apartments designed to cater to medical tourists. The accommodation had been dubbed “a holistic haven that fuses physical, mental and spiritual elements”. Traveling around the city I had noticed a high number of hospitals and learned that medical tourism is an important industry. Apparently a large number of Indonesian people from Sumatra come to Malacca for treatment. The latest count indicated that over a half million tourists came to the city for medical purposes.

I also noticed a brochure advertising the number of residential buildings that are specifically designed to cater for the 152% growth in Airbnb guests since 2016 and the expected surge of 28 million tourists in 2018. Another project was selling 1,350 square feet luxury apartments for M$1,809,000 or about USD$452,250.

After a long bus journey back to Singapore, I dreamed of the proposed high speed rail that would connect Singapore and Malaysia. This would allow passengers to travel to Malacca in an hour and then up to Kuala Lumpur and Penang (another interesting and beautiful spot). The proposed 350km (220 mile) line would have an operating speed of 320 km/h (200 mph). This high speed train was announced in 2013 by the now ousted Malaysian Prime Minister Najib Razak together with Singapore's prime minister, Lee Hsien Loong. Completion was scheduled for 2020.

The new Prime Minister, Mahathir Mohamad, first threatened to scrap the project but later said that it would only be postponed due to the high cost. Japanese, South Korean, Chinese and French firms have expressed interest in participating in the project. It is important to note that the excellent but now crowded four lane North-South Highway from Johor to Kuala Lumpur was built at the time when Mahatier was previously Prime Minister of Malaysia. It now extends 772 km (480 mi) from the southern tip of Malaysia to the Thai border in the north. The project was launched in 1991 and completed in 1994 becoming the main backbone route for Peninsular Malaysia.

During my bus trip to Malacca I noticed that the highway was busy with cars racing down the expressway in almost a continuous line. At the immigration and customs points on both sides of the strait separating Malaysia and Singapore, the cars and buses were lined up bumper to bumper. Clearly there is a demand for more and more transport infrastructure not only in Malaysia but throughout Southeast Asia.