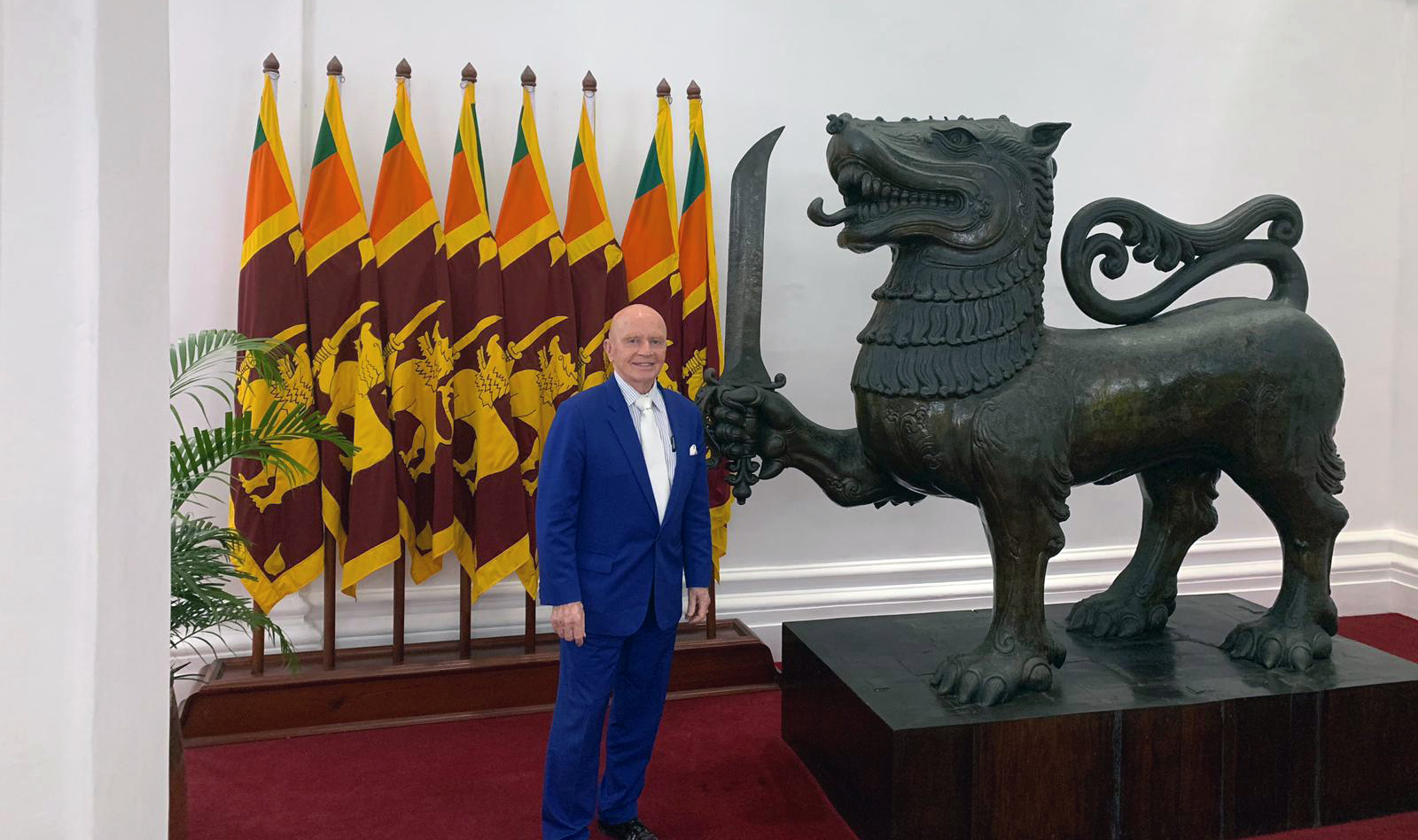 In early December 2019 I was invited to speak at a business event in Sri Lanka organised by John Keells Holdings PLC, a major conglomerate in the country. It was a great opportunity to renew my view of the Sri Lankan economy and stock market. Last year’s terrible Easter bombing that hit luxury hotels and churches across the country had proven disastrous for tourism in particular and the economy in general. And it had added to an already bitterly divided government. But elections in November brought a new Prime Minister into power and I was interested to see how things were changing.

Upon my arrival I took a tour of Colombo visiting a number of new developments including John Keells’ impressive hotel-residential-mall complex “Cinnamon Life”. I met with Senior Advisors to the government and made a presentation to a packed house of business people invited by John Keells. During my stay I also had the opportunity to visit other parts of the country including Sigiriya and Hikkaduwa. Talking to politicians, business people, locals as well as journalists I was able to refresh my view on the current situation and my outlook for Sri Lanka.

In the wake of the attack Gotabaya Rajapaksa won the November 2019 elections and became President. He had been Defence Secretary under his brother’s government and had been dubbed a ‘war hero’ by some for his role in ending the civil war with the Tamil Tigers, despite accusations of human rights violations. Given this track record it seems voters saw him as someone who could protect them from terrorism. His brother Mahinda had already served the two terms limit as President and thus could not run again. But when Gotabaya took office he used his presidential power to appoint his brother as Prime Minister. A Parliamentary Election is scheduled for May of this year.

Sri Lanka has a total population of about 21 million of which 70 % are Buddhist, 12 % are Hindu,  9% are Muslim, 6% are Catholic/Christian. As dictated by the constitution chapter 2, article 9: “The Republic of Sri Lanka shall give to Buddhism the foremost place and accordingly it shall be the duty of the State to protect and foster the Buddha Sasana.” Religion played a role in the civil war between 1983 and 2009. There have been incidents targeting minority religions since then including the latest terror attacks. However, despite Christianity being a minority religion I found that everyone seemed to be celebrating Christmas and preparation for the festivities were running high during my visit.

Tax Cuts to Revive the Economy

The World Bank’s Chief Economist for South Asia warned that despite some good reasons for fiscal stimulus there was a need to prevent over heating of the economy, which could lead to price increases and a weaker exchange rate. Others pointed out that the government was thinking of the Laffer Curve, named after American economist Arthur Laffer. This theory assumes that there is an optimal income tax rate up to which the revenue will increase and if the rate rises above that optimal rate, revenue will begin to fall. Therefore when a country is in the revenue falling region a reduction of the income tax rate would increase revenues.

The maximum personal income tax rate is now down from 24% to 18% while withholding tax on interest income is at a maximum of 5% and withholding tax on dividends has been removed.  Most importantly the Value Added Tax or VAT was reduced from 15% to 8% (except for VAT on banking, insurance and financial services.)

In order to boost condominium sales the sector was exempted from VAT as were tourism related services provided that 60% of the turnover is sourced from local supplies. The envisaged tax cuts are projected to reduce government revenues by a third in the short term, but were expected to boost the economy and result eventually in higher government revenues (as per the Laffer Curve mentioned above).

The Chinese influence in Sri Lanka has been growing over the years.

During my stay in Colombo there were on-going visits by high-powered Chinese delegations. One delegation promoting the One Belt One Road initiative met with the Confederation of Micro, Small and Medium Industries to encourage cooperation agreements for trade and technology.

Major infrastructure investments were made by the Chinese in Sri Lanka in recent years: The Chinese built the 26 km Airport Expressway which has made transport from the airport to the city much easier. They were also involved in building the 133 km Southern Expressway. A 170 km Central Expressway is currently being constructed. Both Chinese and SriLankan companies are involved in the work.

From the end of the Airport Expressway another highway is being built bypassing downtown Colombo and leading directly to the Port City. The Asian Development Bank is lending $300 million with the remaining costs being funded by the Sri Lankan government. But a Chinese construction company is building it!

Furthermore, the Chinese built a container point in the Colombo port with an investment of USD 500 million which is owned and operated by CICT. They also provided a loan of $800 million for the construction of the Hambantota port and then took over the running of the port on a 99 year lease in 2017.

They are also involved in building railroads. One railway conceived by former President and current Prime Minister Mahinda Rajapaksa in the South of the country is being built by the China National Machinery Import and Export Corporation and the China Railway Services Company. It will lead from Matara to Katarangama and involve three main bridges, nine small bridges, two subways, five railway stations and 21 crosscut railways.

Interest from Japan is also high and during my visit in December the Japanese government announced that it would extend full assistance to set up a LNG power plant in Sri Lanka. The Japanese government had already agreed to build a light railway transit project in Colombo.  At the same time, a naval ship belonging to the Japanese Maritime Self-Defence Force arrived at Trincomalee Port on a goodwill visit.

During the first Rajapaksa period from 2005 to 2015 relations with India were closer in order to end the civil war. In 2012 the Rajapaksa government established a bilateral defence dialogue with India. But ties with India suffered in 2014 when Sri Lanka allowed a Chinese submarine to pay two visits to Colombo Port and the Indian government protested. Nevertheless with the large Tamil population and the proximity to India in the north, relations with India are destined to be important. Indian companies are investing in Sri Lanka and one of the large hotel projects on the Colombo waterfront is owned by an Indian company.

The U.S. is Sri Lanka’s largest trading partner. The previous Rajapaksa government concluded an Acquisition and Cross-Servicing Agreement with the U.S. Now the U.S. has offered a grant of almost a half a billion dollars to fund transportation infrastructure throughout the island. The U.S. Millennium Challenge Corporation is offering $480 million to upgrade the road network, modernize traffic systems and automate the country’s land registry. But a local organization, the Alliance for Economic Democracy, opposed the Millennium grant claiming that it would lead to dispossession of land from the people, U.S. surveillance and data gathering and loss of natural resources. A special committee has been put in place by the government to study the MCC agreement and provide a recommendation on how to proceed.

The new President Gotabaya Rajapaksa has called for more efficient public services which now represents a seventh of the entire workforce. Nepotism and corruption have been a major problem. Government institutions have been criticized for inefficiency, lack of integrity and incompetence. As one commentator put it: “A colonial mentality that public servants are above the normal citizenry still exists in the minds of many government servants…”

The revival of state-owned enterprises is crucial. The country now has more than 400 SOEs of which regular information is only available for 55. These SOE’s accumulate billions of losses annually. According to the new government the bad performance is due to a lack of good governance, clear accountability and performance-based incentives.

The Sri Lankan branch of Transparency International (TISL) said that the Commission to Investigate Allegations of Bribery or Corruption (CIABOC) which was established as early 1994 needed to make people aware of the mechanism to report corruption. A survey by TISL indicated that 72% of the public were unaware of its existence and that one-quarter of the local population found it acceptable to pay a bribe to public officials to fulfil their requirements.

At the end of my visit I concluded that the future could be bright for Sri Lanka. Despite all the troubles the country has faced as a result of the civil war, there is now a new sense of hope and optimism.

With the right policies in place, and I think the stimulus package introduced by the government is the right way forward, Sri Lanka can resume its growth path which was as high as 8 % after the end of the civil war. Already increased local and foreign investment augurs well for the country. And I expect tourism to resume its upward trajectory.

Of course, the subject of corruption needs to be addressed. To improve the governance and performance of state-owned enterprises these should be listed on the stock market. This would also draw private capital and boost liquidity.

When we look at emerging markets we look at value and Sri Lanka looks very good in value terms. After conversations with the management teams of a variety of companies I am particularly bullish on the real estate and tech industries in Sri Lanka. I will certainly keep an eye on developments in the country and potential investment opportunities, in particular.